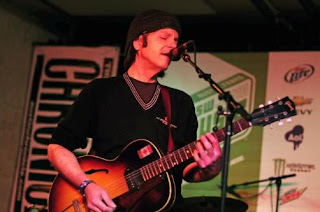 Former Hüsker Dü and Nova Mob member Grant Hart was the recent victim of a house fire. Two rooms in his home burned, and Hart was sent to the hospital. He is fine now, according to friend. His two cats survived, which he is very happy about, but he did lose his favorite guitar and some other equipment. According to the Star Tribune, "Reps from First Avenue and the Turf Club said they were interested in holding benefits for Hart if needed."

(posted at thedarkstuff.com) (Thanks to Dane O for alerting me to this news)
at January 28, 2011
Email ThisBlogThis!Share to TwitterShare to FacebookShare to Pinterest
Labels: announcement, Husker Du

Built To Spill - "Elements" from When the Wind Forgets Your Name ; Sub Pop Bare Jr. - "If You Choose Me" from Brainwas...